Barking Up The Right Tree: Tips For Disc Golf Dogs

When Dre Fredrick took his dog Sasha to the Buxton Woods course in Banks, Oregon (around forty minutes outside of Portland), he likely expected to enjoy a round like any other. He let Sasha go off leash, and they set off.

Then Sasha found the pigs.

“The neighbor's pigs had gotten out of their pen,” Fredrick said. “She was chasing this herd of pigs all over the place while I was yelling and freaking out. In the end, it worked out because my dog just ended up corralling them all back into their pen, but this was one of those moments where I learned to pay a lot more attention to my dog when she was off-leash.”

Fredrick’s story is a good reminder to all players who take their pooches to the course that even while the experience usually brings plenty of joy to both animals and owners, it also creates challenges. In order to help with those, we spoke with a variety of experienced disc golfing dog owners and one human-animal communication expert to learn the methods they’ve found most effective for training pets.

Staying Out of the Ruff

One theme that came up time and again from people we talked to was that a willingness to take training slowly was key to having pleasant rounds with a furry friend.

For example, Andrew Johnson’s dog Ladybird was on-leash for almost three years in order to teach her to not run off to get discs after a shot. After that long waiting period though, she now climbs trees and swims to retrieve discs, and her excitement is reserved only for discs that hit the water or the rough instead of every throw.

“We didn’t really have the idea to train her to do anything special, just get her to basically behave while we were playing, and it took patience,” Johnson said.

It was similar for Matthew Bialkowsi, whose dog/caddy Ollivander didn’t get to go to a course until he had mastered some basic obedience to commands for rewards like dog treats.

“Being consistent is the best thing you can ever do for training a dog,” Bialkowsi said. “Routines are golden with them. Repeat, repeat, repeat. They will learn. Trust the process.”

Co-host of the PDGA Radio podcast Sara Lamberson is also a fervent dog lover who recognizes the value of patience when taking dogs out for rounds. Her three Instagram account-sporting dogs have habits that take some getting used to: one of her two springy Italian greyhounds leaps into her arms when people come near (no need to bend down), the other whines whenever they stop for a shot, and her third dog “barks his face off” at pretty much anything that moves.

“My dogs are not the best examples of disc golf dogs!” she readily admitted.

Still, awareness of this has made Lamberson conscientious of what guidelines she should follow to make sure her dogs don’t get out of hand on the course. She only takes one at a time, always on-leash, and she doesn’t take them out during her solo rounds. When asked if she thought the patience and concentration it took to play with one of her dogs was similar to that required to play well through the waiting and distractions often present in a tournament round, she wholeheartedly agreed.

Ultimately, it seems that no matter what type of personality your dog has, it’s most likely not going to be an overnight process to make them course-ready. Just like in the sport we play, improvement will take time, systematic practice, and learning from past mistakes.

While patience is all well and good, simply waiting around for your dog to improve will never be effective. Mostly it comes down to consistency—conditioning your dog by always letting them know which behavior is desirable and which is undesirable.

Fredrick, owner of the pig-chasing Sasha, always used a stern “no disc” command when Sasha went to mouth a disc on the ground while he practiced putting.

We spoke to another player named Ian Andrews who often plays with his dog Samson. He preferred physical over verbal cues to train his dog.

“I would hold him on the leash the entire time I walked, ensuring he stayed by my hip,” Andrews said. “When I stepped up to a tee pad or up to my shot, I set my bag down and immediately commanded a ‘sit’ with treats in my pocket. This must be done every single shot. Drive, upshot, and putt. The idea is for him to recognize the bag being set down as the command; the voice command is just a backup. So at a certain point he only got treats for sitting when the bag was set down. If there was no response, voice was used without a treat and merely verbal affirmation.”

Physical cues are a bit more precise than verbal ones, making it easier for dogs to learn. Because of this, Dr. Robin Bisha, who researches human-animal communication at Texas Lutheran University1, had a suggestion for dog training many disc golfers might not have heard of.

“Training a dog to respond to voice cues by giving treats is a fine and humane way to train,” Bisha said. “It's just not as efficient or flexible as using a clicker to mark the exact behavior or steps along the way to the exact behavior.”

In clicker training, you use a small device that makes a clicking sound. First you need to train the dog to learn that a click results in a treat by going through a short sequence where you make the clicking sound and then give the dog a treat. It doesn’t take that many repetitions for this to, well, click, as dogs are very motivated to learn how to get more treats.

“Using a clicker will speed the training and allow us to break complicated behaviors into small, manageable bits,” Bisha said. “Also, the clicker buys us a little time to get the treat to the dog without accidentally reinforcing the behavior the dog moved into just after the behavior we liked.”

You can get a dog clicker online or in pet stores for a buck or two, so this might be a good option for golfers just starting out with dog training or who have hit an impasse with their pooch.

While we’ve talked a lot about getting what owners expect out of their dogs, the dogs—and people sharing the course with them—should also be able to expect things from their owners.

The overriding thing that everyone we talked to wanted to emphasize is to do for your dog what you’d do for yourself. Be careful of overdoing it with heat and distance. Get some rest in the shade. Check for ticks. Bring lots of water and snacks.

Speaking of water, something important to consider is that though many disc golfers use discs for water bowls, that can be confusing for some dogs who are struggling with not mouthing discs. Lamberson suggested some “really cool collapsible water bowls that have a carabiner on them” as a convenient alternative to discs.

“And if [my dogs] don’t want to drink it and it’s hot outside, I’ll just pour it over them,” she added.

Bags for your dog’s waste are also musts, or, as Fredrick put it, “Do your doody! Do you relish the idea of pulling your disc out of a pile of dog poop? Of course not!”

Additionally, all of the golfers we talked to cautioned heavily against not paying enough attention to your unleashed dog.

“Off-leash courses don't mean you're off the hook,” said Fredrick. “We all think our dogs are the sweetest and would never start trouble, but we all have horror stories about loose dogs.”

Living Vicariously Through Their Joy

With all the considerations we’ve thrown at you, the concept of disc golfing with a dog may now sound daunting. However, if it’s something you really want to do, don’t be scared off. Lamberson suggested that anyone interested should simply give their dog a chance to hit the course on a leash and see what happens.

“I would just urge people to try it,” Lamberson said. “Take them out for nine holes or something, and just see how it goes. So many smells. My dog Coltrane was like, ‘Oh my gosh this is amazing, so many dogs peed here. It’s really exciting!’ I’m living vicariously through his joy, and as a crazy dog mom, that’s really cool for me.”

1. Bisha is a colleague of the author.

Did you know you can search specifically for dog friendly courses with UDisc? Look through the filter options in the apps Courses tab. 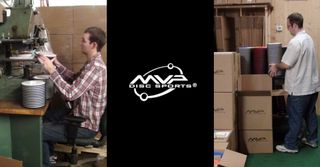 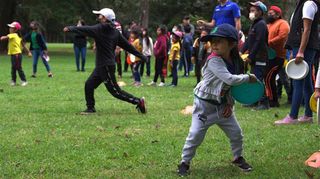 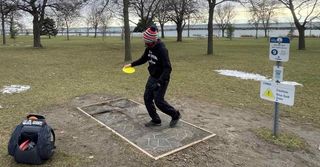 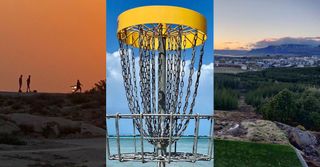