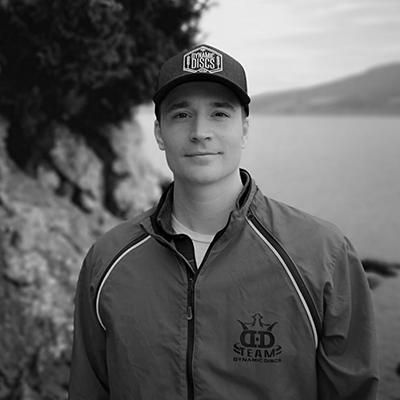 The forehand—a.k.a. sidearm, flick, and likely a few other names—is one of the two most frequently-used throwing techniques in disc golf (the other being backhand). Though some people naturally gravitate to this style from the outset, for those who don't, trying to learn it is often a huge source of frustration.

But developing a forehand gives players a powerful weapon in the battle to save strokes. They have more options when scrambling, can keep their eyes on small gaps throughout the entire throwing motion, and can play winds and slopes more strategically.

To help those looking to add this weapon to their arsenal, Dynamic Discs-sponsored pro Kyle Giovannini helped identify five of the best forehand/sidearm tips videos out there. Below, you can watch each of those videos and also see our breakdown of what each video focuses on and the times in the video when specific points are made.

Need work on other parts of your game? Other articles in the 5 Great Videos series focus on putting, grip, upshots, and more. Find all of them here:

This works on all YouTube videos and is a great trick to know if you want to see something specific about someone's form while watching tournament coverage, tips videos, or any other content.

Tips From The Longest Sidearm Thrower In The Game

To be fair, as far we know pro Eagle McMahon has never won any official title for longest sidearm in disc golf. But there's little doubt that even if some superhuman out there can throw sidearms farther than him, it can't be by very much.

If you're not familiar with McMahon, he's a player in his early 20s who's been on professional disc golf fans' radars since he was a teenager. First known for huge backhand distance, he more recently developed a booming forehand that has made a lot of people wonder what exactly he's doing to produce so much power in what looks like an effortless motion.

In the video below from McMahon's vlog, McMahon breaks down all aspects of his forehand before analyzing slow-mo footage of his own throws that demonstrate his advice in action. At over 23 minutes, it's the longest video featured in this article, but our breakdown helps you easily see where the sections most interesting and valuable to you can be found.

Start-0:39 Intro to the video (no tips)
0:40-0:55 Beginning of section on grip and demonstration of the stacked grip (grip demo starts at 0:50)
0:56-1:19 Forehand power grip: Demonstration and brief discussion
1:20-1:50 Forehand fan grip: Demonstration and brief discussion
1:51-2:13 Beginning of section on thumb placement in grip that's interrupted by wind (no tips)
2:14-2:41 Tips on thumb placement
2:42-3:06 Where the disc should be positioned in the webbing between thumb and pointer finger
3:07-3:26 Where to position the fingers that aren't underneath the disc
3:27-3:40 Brief summary of grip (no new tips)
3:41-4:16 Explanation of why the wrist should be very active in a forehand throw
4:17-4:42 Why forehands should have a non-linear reachback
4:43-4:49 Demonstration of a correct forehand reachback for long-distance shots
4:50-5:33 Explanation of why people should learn to throw with shorter reachbacks before attempting longer ones
5:34-5:46 Advice to warm up before practicing forehands to protect your shoulder from injury
5:47-6:13 Explanation of how power in backhands is generated by bringing a disc close to the chest
6:14-7:30 Emphasis on how the elbow should tuck in near your hip just before the explosive throw movement begins. Includes examples.
7:31-8:32 Run up: First steps to ready the hips and how to shuffle
8:33-9:25 Start of throwing motion: Hip placement and weight shift
9:26-9:44 End of throwing motion: Arm movements and last step
9:45-10:36 Tips for getting the last motions of the throw right to generate maximum power
10:37-10:54 Quick review of all the steps in a forehand throw
10:55-12:18 Encouragement to practice forehands with more than just overstable discs so that it becomes a versatile shot in your toolbox
12:19-13:08 Introduction to the next section, which is McMahon analyzing footage of his own forehand shots
13:09-13:52 Analysis of the first steps in his run-up
13:53-14:42 Analysis of weight shift and release
14:43-14:49 Replay of full shot in slow motion with no pauses
14:50-15:28 Brief look at another shot similar to the previous one. Nothing very new in this section.
15:29-16:29 Review of footage of McMahon forehanding a putter. Changes in run-up and reachback that help the throw be more smooth and controlled are emphasized.
16:30-16:56 Review of footage of McMahon forehanding a midrange. New angle (from rear, not side), but otherwise not much new analysis.
16:57-17:46 McMahon forehanding a driver. Rear angle.
17:47-18:05 Discussion of how your follow-through might change over time as your weight shift improves
18:06-18:39 Analysis of side-angle view of a forehand with a driver. Very noticeably different shuffle and higher reachback
18:40-20:20 Footage of a very high power shot. McMahon pointing out that his arm is able to reach a very strange position that he wouldn't recommend others trying to replicate.
20:21-21:18 Recap and explaining why he made the video (no new tips)
21:19-End Footage of McMahon throwing forehands left-handed (badly) to show how even those who know exactly what to do can't get their bodies to do it without training. Words of encouragement and telling viewers improvement will come with time and practice.

Though Scott Stokely's heyday as a player was the 90s when he was annually near the top of the World Championship leaderboard, he's recently reemerged on the disc golf scene with instructional videos related to various aspects of the game. One of the first disc golfers to organize clinics across the country, his advice has had an effect on many of today's top players.

Stokely competed at a time when the distance forehand was not a shot many of the top players had developed, but he was one of the few who did. He also held the world distance record for disc golf forehand for a time.

Below Stokely breaks down what he sees as the most important aspects of the forehand in a quick, simple video that is nonetheless chocked full of good pointers. If you made it through McMahon's video, you may notice their advice about follow-throughs differs. It could be valuable to try both tactics and see which gets you the best results.

Nate Sexton is one of the most well-known disc golfers on the planet, and he's a forehand specialist. While he isn't known for having the distance of McMahon, he easily has over 400 feet/122 meters of power and is a master of angle manipulation and accuracy.

Sexton goes over how he approaches the forehand game in the video below from Infinite Discs. Perhaps what's most refreshing about Sexton's approach is the encouragement to do certain aspects of the throw in the manner that feels most comfortable while also making sure it's clear what things are essential to produce a good forehand.

Additionally, heeding Sexton's advice to learn forehand with understable discs could help your sidearm game become a more versatile weapon than just something that gets hyzers to fade a different direction.

Start-0:14 Set-up (no tips)
0:15-0:34 Sexton gets close to the camera and shows his forehand grip
0:35-1:23 Disclaimer that no one grip is perfect for everyone because people's anatomies and preferences are different. He does give two basic rules he believes apply to all good forehand grips, however.
1:24-2:42 The run-up. Slow example of run-up from 1:55-2:00. The rest is explanation of how the run-up demonstrated helps set the body up to transfer power to the disc.
2:43-2:56 Beginning of section on reach-back, including how (like Stokely and McMahon emphasized) the wrist is very active in the forehand
2:57-3:18 Showing how a forehand reachback is non-linear (up high, not straight back)
3:19-3:54 Advice mostly concerning where the elbow should be at different points in the throwing motion
3:55-4:32 Which parts of the body act as levers to create different shot angles
4:33-5:05 Sexton expressing his belief that forehand is harder on the body than backhand and why he thinks that's so (If you're worried about injury during forehand practice, don't miss the last video in this article.)
5:06-5:24 Suggestion to work on wrist speed so that your arm won't have to work as hard to create distance
5:25-6:05 Encouragement to learn forehands with less stable discs so that you'll increase your ability to control angles
6:06-6:57 The problem with rolling your wrist during a forehand throw
6:58-7:33 Why backhand dominant players should learn to throw hyzer forehands instead of flex shots or anhyzers
7:34-End Recap of final advice that started at 6:06 and brief ad for Infinite Discs

If some of the advice in the earlier videos went over your head, this video from Dynamic Discs could help you out. It's a very basic explanation of some of the most important things to think about when working on your backhand and considering when to break it out during rounds.

Start-0:18 Intro (no tips)
0:19-1:09 Grip: Two options for where to place the two fingers that go under the flight plate
1:10-1:28 Grip: Position in relation to webbing between thumb and pointer. Thumb positioning is also discussed.
1:29-2:14 Grip: Why even if a one finger grip feels comfortable, it may not be ideal
2:15-2:27 Technique: Very quick explanation of what the arm and wrist do during the throwing motion
2:28-3:10 Technique: Lead with the elbow and advice about how to do that
3:11-3:36 Technique: Follow-through should be down the fairway, not across the body
3:37-3:54 Technique: Weight shift tips
3:55-5:13 Tips for disc selection when learning forehand
5:14-5:41 When to throw forehand: Why forehands on right-to-left shots in the woods (for RH players) can be less dangerous than backhand anhyzers
5:42-5:56 When to throw forehand: In right-to-left winds for RH players
5:57-6:09 When to throw forehand: When range of motion is limited
6:10-6:27 When to throw forehand: When you need to hit a small gap
6:28-End Outro (no new tips)

Forehands put a lot of strain on your elbow, and if you're about to go out and practice over and over again what you've learned in the videos above, you should get your elbow ready for that.

That's why the last video we've included is from disc golf-focused fitness organization Disc Golf Strong (DGS). In it, DGS founder and head performance coach Seth Munsey shows you how to do two very easy exercises that can help protect your elbow from injury.

Take a look, and if you like what you see, you may want to consider subscribing to our twice-monthly newsletter. Along with keeping you updated about all of our latest articles, it features an exclusive fitness tip from Munsey on the first Wednesday of every month. You can also learn more about Munsey and his organization's mission here.