Out in the Mojave Desert twinkle the neon lights of Las Vegas. A place with an average February temperature just above 60°F/16°C that knows a thing or two about how to put on spectacular events, Vegas, as host of the Las Vegas Challenge disc golf tournament, has become the traditional kick-off point of the professional disc golf season.

The 2022 Las Vegas Challenge took place from Thursday, February 24 to Sunday, February 27. It was the first Disc Golf Pro Tour Elite Series event of the 2022 season.

How To Watch the 2022 Las Vegas Challenge Disc Golf Tournament

When was the 2022 Las Vegas Challenge Disc Golf Tournament?


Scores and stats from the 2022 Las Vegas Challenge are on UDisc Live.

How to Watch the 2022 Las Vegas Challenge Disc Golf Tournament

Who Won the Las Vegas Challenge in 2022?

Drew Gibson won after a four-hole playoff with a score of 39-under par.

Gannon Buhr (also 39-under par in regulation play) finished second after losing the playoff to Gibson. Buhr was leading by one entering the last regulation hole but went out of bounds on an upshot, allowing Gibson to push the match to a playoff.

Third place went to Calvin Heimburg with a score of 36-under par.

Who Won the Las Vegas Challenge in FPO in 2022?

Catrina Allen won with a score of 30-under par. Notably, she did this in her first Elite Series event with discs from a brand new sponsor, DGA.

Paige Pierce earned second place with a score of 29-under par. She was tied with Allen entering the final hole but went out of bounds throwing what was likely an attempt to put herself in eagle range on the par 5 18th. This let Allen play the hole safely for the win.

Estonian star Kristin Tattar came in third at 25-under par in her first showing in the U.S. since August 2022.

The annual competition in Vegas has evolved quite a bit in its 22-year history, including undergoing a name change. As many longtime disc golf fans will know, the LVC was called the Gentlemen's Club Challenge as recently as 2017.

"The 'gentlemen' were the original group of players who came out to Sunset Park in the early 1990s to play and compete," said assistant tournament director Scott Merritt. "They became known as the Gentlemen's Club and would take on all comers. The name change came about as a way to more positively promote the event and to bring in new sponsors."

The venue switch occurred after the Las Vegas Disc Golf Club (LVDGC) held their 2015 Halloween Classic at a location owned by the same organization that owns Wildhorse. The club's top-notch event organization and the evident high enthusiasm for disc golf in the area were so impressive that Wildhorse's owners suggested doing a disc golf event at their traditional golf course.

Though Sunset is a solid course and a piece of disc golf history that first opened in 1977, the club jumped at the chance to move their city's premiere event from a public park to a place that, for one week a year, could be made into a private disc golf heaven. Then, after just one year of hosting the tournament at Wildhorse, tournament director and former LVDGC board member Jeff Jacquart decided to create a business just to run the event.

"A key reason for the change was to remove the Las Vegas Disc Golf Club from any financial obligations tied to the event, especially with the TD no longer being on the club board," Merritt explained. "Jeff 'retired' from being a board member so 100% of his disc golf time could focus on the GCC/LVC."

With more courses and a dedicated organizer, a tournament that first took place in 2000 with just 44 participants can now, according to Merritt, accommodate nearly 600 with plans to add more spots in the future. It's also become recognized as the first big event of the disc golf season. An unexpectedly good showing in Vegas can set expectations high for a formerly under-the-radar player for the rest of the year, and a disappointing performance from an established competitor can raise concerns that cast a shadow on the rest of their season.

Contrary to the saying, what happens in Vegas often leaves it on the tip of everyone's tongues.

A lot of memorable moments have come out of Vegas over the many years of the tournament. Below are some standouts.

Hole 7 on the Innova Champion Course only measures 432 feet/132 meters but is scored as a par 4. OB lies well within the circle on either side of the basket in the form of sand traps, an OB golf green eats up anything coming up short of the pin, water creates a menacing right edge of the fairway, a sidewalk blocks off anything to far left, and don’t forget the OB line just over the crest of the hill where the basket sits. This didn’t deter Garrett Gurthie from smashing a jaw-dropping drive during his second round in 2020. You can watch the clip captured by Gatekeeper Media below.

Snow and a Sudden-Death Playoff for Open Women in 2019

One reason Vegas is the spot many pros flock to so early in the season is that it tends to have warmer temperatures than most of the country. However, in 2019 the Open Women division played their first round in a freak Vegas snowfall. Both the competition and weather heated up, though, and it all came down to a sudden-death playoff between Paige Bjerkaas and Catrina Allen. If you don't know already, you can see how it ended in the clip below from JomezPro:

Catrina Allen Lays Down the 2018 Roller of the Year

During the 2018 LVC, most of the Open Women field stepped up to hole 7 on what was then called the Adidas Terrex course thinking par. Catrina Allen, though, wasn't among them. She was set on attacking the 453-foot/138-meter par 3 and took a stroke on the field by laying down an amazing roller. This shot ended up winning the 2018 Roller of the Year title from disc golf news publication Ultiworld Disc Golf. Watch the clip below to see how Allen’s shot navigated massive distance, elevation change, and vegetation to park the hole.

The Ace That Sold a Thousand Thunderbirds

Though he didn't succeed in his valiant attempt at a comeback win over eventual 2017 champion Ricky Wysocki, then-Innova-sponsored Paul McBeth certainly had the shot of the tournament. He bagged an ace on a 368-foot/112-meter hole with an Innova Thunderbird in front of a thrilled crowd. The shot was the centerpiece of an Innova ad until McBeth changed sponsors in the offseason before 2019. Check out the shot as caught by Spin TV below: College Disc Golf Clubs: Why To Join And How To Start One
College Disc Golf clubs are a fantastic way for disc golfers to get connected to peers and their university, improve their game, and dip their feet into competitive rounds.
Theresa Garcia
Aug 26 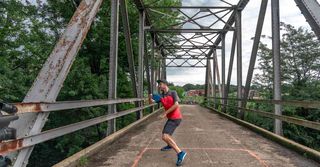 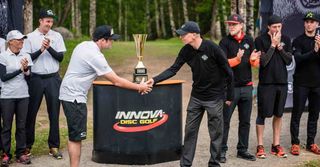 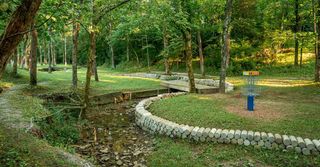